Vegatables and Herbs Talk
by Professor Ray Broughton
The audience was a little bemused at the first slide shown to them at the beginning of the Speaker’s Talk. What was it?  Nothing less than a bottle of Heinz Tomato Ketchup (other varieties are available). Where did this fit into the world of horticulture we were asking, when we were given the unlikely answer.  Tomato Ketchup is wonderful for cleaning items such as secateurs and hedge clippers.  Simply smother the secateurs with the stuff and leave for three days when you brush off and ‘bingo’ your tools are as good as new, bright and shiny.

We were informed that half-rotted compost was best for clay soils whilst fully rotted compost was best for light, sandy soils.  Brassicas prefer soil to be neutral or even alkaline above pH 7.00 which helps them maximise nutrient output and helps to reduce clubroot spores in the soil.  If you can test the soil, you can help raise the pH to 7.00 by adding lime additive.   Bonemeal is useless on chalky soils whilst Vitax Q4 is a good compound and contains 13 nutrients.

The European Union will shortly be making it mandatory for all fertilisers to be granular but this method takes 2 weeks to reach the vegetables , whereas liquid feed reaches the plant in 24 hours.

The humble comfrey can be used as a compost activator.  Cuts of fresh comfrey can be laid on the compost heap and layered with weeds or grass cuttings. etc.  Comfrey is so rich that it can be used as if it was manure to activate slow growing compost or leaf-mould heaps.  Wilted comfrey can also be used to line a potato trench and when growing tomatoes outdoors or in a greenhouse border, wilted and chopped comfrey will add 100% natural organic high potash fertiliser.

On to carrots.   There are five main types and distinctive by their shape:

Carrots are best grown on sandy, well drained soils with no fresh manure added in the previous season.  On heavy soils, the short rooted cultivars are more successful.

Spuds.  There are different types of potatoes, usually described as early, second early and maincrop potatoes. These names indicate when they crop and also give an idea of the space you’ll need.  If you are short of space, concentrate on the earlier crops and it is worth noting that early crops are less prone to encounter pest problems as the potatoes are lifted much earlier in the year.

Second earlies take between 16 and 17 weeks to mature after planting, therefore you should be able to harvest from end of June through to the beginning of August.

Main crops are ready between 18 and 20 weeks after planting and can, therefore, be lifted usually from July through to October.  Maincrops take up most space on the plot but do tend to have the best varieties to grow.

Professor Broughton suggested growing potatoes in Barley Straw.  First of all you need the soil to be loose, so turn it over once and work in some fertiliser to help the potatoes grow.  After you have planted the seed potatoes put loose straw over the potatoes and between the rows at least 10" 15cm deep.  When you grow potatoes in straw you’ll see the sprouts quickly.  Once they have grown 10cms" 15cms cover them with more straw until only 2.5cms of the new growth shows through, then let the plants grow another 10cms" 15cms.  Continue with this procedure for two/three cycles.  Be sure to water the plants regularly.

Potato blight is caused by a fungus called Phytophthora Infestans.  It is transmitted by air, wind and soil.  In the UK almost all the blight fungi on the soil surface is killed by the cold weather in winter.  If you have a smart ‘phone, there is a free App called The Blight Tracker App (EuroBlight) which sends out ‘blight alerts’ to subscribers, warning of possible blight in their area.

Finally, Alastair Dudley-Williams gave the vote of thanks for what was a really wonderful talk and to think it all started with a bottle of tomato ketchup! 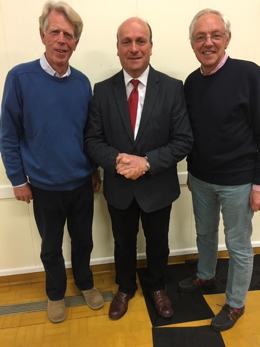