On the 24th June, the Village opened up some of its beautiful gardens to benefit The Rosemary Foundation which received a cheque around £900.00. One of the gardens being opened was ‘Well Cottage’, an Almshouse which was being opened for the very first time.

The Village is very proud of its Almshouses with their distinctive solid flint walls and sandstone porches which were built in the 19th century.   Almshouses were established from the 10th century with the oldest still in existence being in Winchester, which dates back to around 1132.  They were built to provide homes for impecunious, elderly and distressed members of the community.

‘Well Cottage’, which as its name suggests, has a Well in the front garden and this was the main source of water for the Village at the time. The present owner moved into her Cottage around two years ago and the villagers love her colourful displays on those special days, i.e Saints Days, Armistice, longest/shortest days/ Halloween, which have featured relevant items ie, daffodils and leeks for St David’s Day, thistles for St Andrews  and so on.

Her garden is planted for scent, Jasmine at this time of year is simply beautiful, lavender and dianthus, all assail the senses. She has a special ‘Fairy Grotto’ for her Grandchildren which is a little ‘hide-away, decorated with little sparkly fairies and sunflowers. The latest addition to her garden is a Coprosma ‘Tequila Sunrise’. This is a pyramidal shrub with dense foliage like colourful gemstones, which  intensifies in winter to brilliant orange and red and is evergreen.

The Village was delighted to be able to welcome, not just locals, but visitors from Australia, Scotland, Canada and even a lady who was on a cruise ship which had docked in Southampton!  The Australians were somewhat bemused as they are used to huge, wide open spaces, and couldn’t understand our narrow, twisty lanes and small gardens which were described as ‘how cute’, ‘how tiny’ and ‘how neat’!!

To end, here is Fred, you met him last time. Here he is on his 20th birthday, just checking out the geraniums which for the purists among you is the Rozanne variety which is excellent for dry shade, deadhead if you can and it will flower throughout Summer until the first frost. It will light up a dull space. 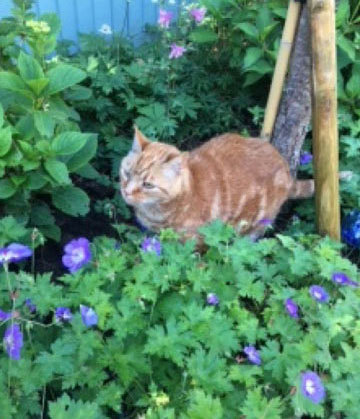 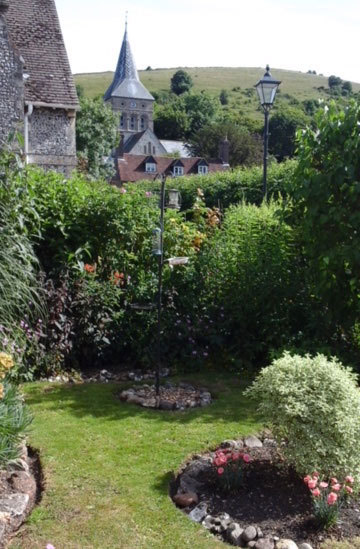 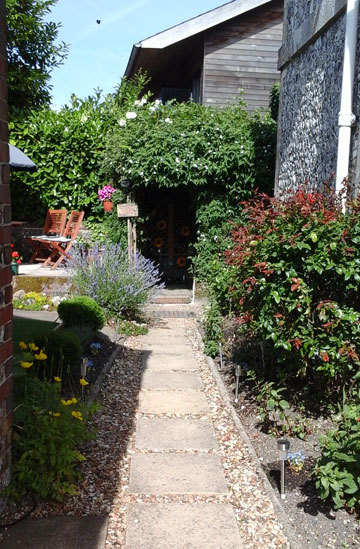