“to inspire passion and excellence in the science, art and practice of horticulture..”

Having become interested in gardening aged 10 he started growing sweet peas and chrysanthemums for pocket money, but then realised he could earn more by putting sprigs of Gypsophila in with them and selling as bunches!!
Having had a long history with Reading University, he is now on the Councli of the RHS and Chairman of the Science Committee.

The Chelsea Flower Show takes place each year on the ten acre playing fields in front of the Royal Hospital, Chelsea. The grass is taken up each for the Show and then replaced later so that the teams building the show gardens, which cost from £250,000 to half a million pounds, can be constructed over a six week period.
Judging nowadays follows a much more rigorous and objective course with points for various criteria including the stated claim for the garden. However the Judges sometimes do not agree with each other so there is another group of senior judges called ‘Moderators’ who scrutinise the marks given and changes may  be made accordingly.

The Flower Show opens on the Monday but is for members of the Royal Family and celebrities only, with the evening open to large businesses
Tuesday and Wednesday are Members Only
Thursday, Friday and now Saturday are Public Days and as soon as the Show finishes, work on planning the show for the following year starts.

Although occasionally there has been a shortage of Show Gardens there is always a waiting list for exhibitors within the Floral Marquee where there is incredible pressure to present something new and maintain standards. The orchids in the Floral Marquee are flown in from Thailand the day before the show opens and arranged overnight!

Professor Gregory also explained how the Japanese ‘Artisan’ garden followed Japanese tradition showcasing the importance of moss.  These ‘clumps’ are in fact individual plants grown to exactly match the small individual rocks with which they ‘interlock’.  Japanese gardens always include beautiful acers and flowing water.

Hepatica is a genus of herbaceous perennials in the buttercup family and usually displayed with other plants.   However, in 2016 an exhibitor had a stand which displayed a wide selection of only these  plants.  Apparently it proved extremely stressful for the grower, but when asked by the Judges if he would do it again, he replied…”Oh no, I could never put the plants through that again…”  However, the exhibitor was awarded The President’s Award

To conclude his lecture Professor Gregory described how in 2016, to coincide with the 100 year anniversary of The East Malling Research Centre, he ‘excavated’ a dying Apple Tree.  The root system was meticulously teased out of the soil over a six week period, bundled up, transported, ‘un-tied’ and displayed on special poles at the Flower Show, the purpose being to examine and show how the roots took in water and nutrients.  The display was so spectacular that it won a Silver Gilt Medal.

The evening concluded with an extensive question and answer session. 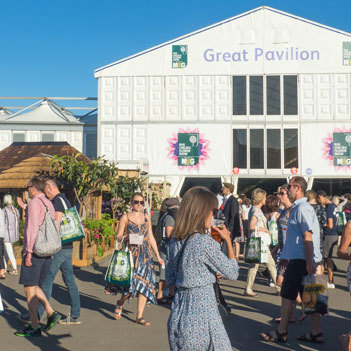 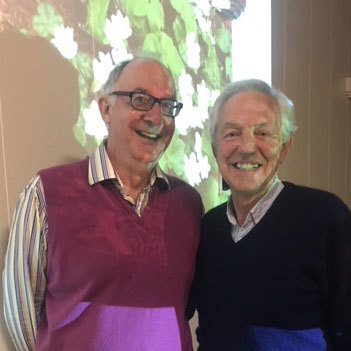 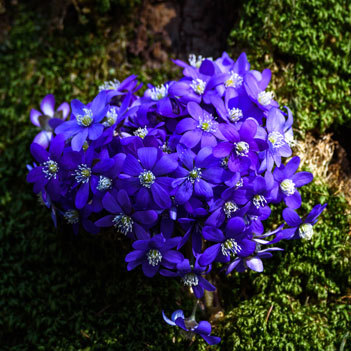 Too stressful for Hepatica? 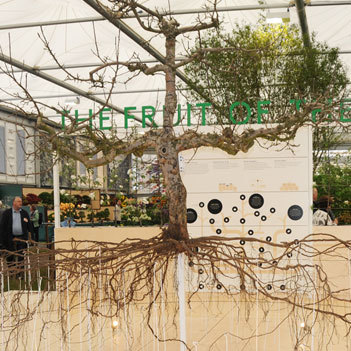 Above: Professor Gregory's apple tree exhibit. The winner of a Silver Gilt Award in 2016.
Back to articles and photos