The Garden Club began its Autumn/Winter season with a wonderful talk on Heritage Apples given Chris Bird from Sparsholt College. Chris is in his 37th year at the College and he quickly proved to his attentive audience that there was nothing he didn’t know about Apples.

There are more than 7,500 known cultivars of apples, and 1,500 seedlings, resulting in a range of desired characteristics. Apples come in green, red, green and red and yellow. They are divided into categories, such as culinary, dual purpose and dessert (eaters).  Culinary, as the word would suggest, are apples that can be cooked.  These apples tend to be larger than dessert apples and are not immediately edible. Dual purpose apples are those that can be cooked early in the season but then become sweeter in storage.

We handled the same variety of apple that Nelson would have had aboard HMS Victory. These apples were able to be kept for two years.  We were told about the Hampshire Easter Orange Apple which is a variety of eating apple commercially produced by Hilliers in 1897.  Hampshire varieties include the Bramshott Rectory, with the apple tree still in the Rectory garden.  We were told that the largest fruit is The Howgate Wonder first grown in Bembridge on the Isle of Wight in 1916 and a single fruit can weigh as much as 2lbs.  It’s good for baking, good with cheese, late flowering and frost resistant.

It was explained that the definition of ‘pippen’ probably came from the Anglo-French word ‘pepin’ meaning ‘seed’ or ‘pip of a fruit’.  In northern regions of England the word was used to describe a small fruit seed. The Sturmer Pippen apple is ready to eat in February and comes from the village of Sturmer in Essex.  Permain as in Worcester Permain, means it is ‘pear’ shaped.

We were given tips on when to feed our apples.  In October with something like Maxicrop which has 35 trace elements  and again at ‘bud burst’.  It was also suggested that planting pink clover beneath apple trees can be very beneficial, as the flowers attract bees which in turn help pollinate the blossom. Additionally, when the foliage rots down it contributes to the healthiness of the soil.

For those cider makers among you, choose varieties of apple that have a high level of tannin.  All apples can make delicious cider but some apples were grown specifically for making cider, such as The Kingston Black and Yarlington Mill.  For a sweeter cider try Gala, Golden Delicious or Red Delicious varieties or mix with apples that are more tart such as Pink Lady and Braeburn for a sweeter blend.

We tasted quite a few apples, tasted some home made cider and fresh apple juice which rounded off the evening perfectly 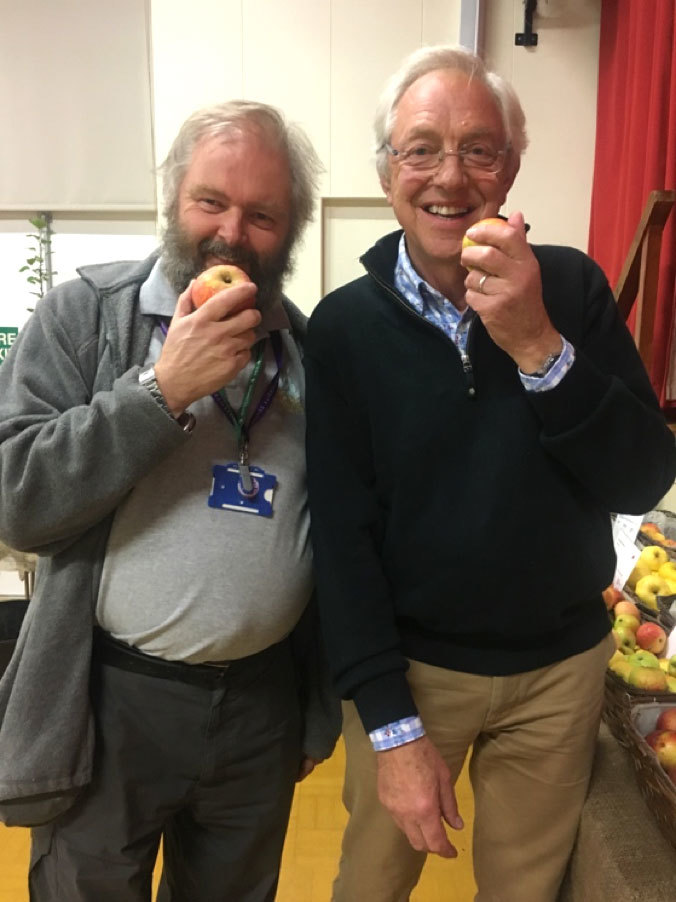