Founded in 1902, East Meon Garden Club held its latest Annual Show last Sunday and celebrated with a big increase in entries across the various classes.

There were entrants who had never entered before being Cup winners, but the stars of course were the fabulous floral displays, immaculate vegetables and the amusing ‘wonky’ and misshapen vegetable class.

The wonderful ‘Produce and Preserves’ loaded down the Show Table which included a delicious looking dessert under the category…make a dish using vegetables from the garden…which was a chocolate roulade, an ingredient of which included beetroot.

Last year there were three entries in the Photography Class, this year 51 photographs were exhibited.

The Committee were delighted to welcome Bill Tyrwhitt-Drake and thanked him very much for handing out the Cups and Trophies as follows:

The RHS Banksian Medal - presented to Alastair Dudley-Williams for gaining the highest number of points in the Vegetable and Flowers Classes.

Novice Shield  - For the person who has never won a Cup or Trophy in the Fruit, Vegetables and Flower classes was awarded to David Bailey.

Edgebourne Cup awarded to Jane Atkinson for gaining the most points in the Floral Arrangement Category.

Produce Cup awarded to Sue Atkinson for gaining the most points in the Produce and Preserves Category.

Best in Show (covering exhibits in the Vegetable, flower and Fruit Classes) exhibit was awarded to Julia Turpin for her Mop Head Hydrangea.

The John Davies Salver was awarded to three exhibitors in the Arts and Craft Class, namely Eleanor Marks/Margaret Marks and Sue Zirps.

The Committee was delighted to receive comments from the Judges on the high standard on display and how hard exhibitors must have worked to achieve such wonderful results.

No show is complete without refreshments and the kettle never stopped ‘singing’ thanks to the tireless efforts of the ladies providing the tea and home made cakes.

Hard work, but a fantastic day.   A big ‘thank you’ for all your wonderful support, much appreciated. 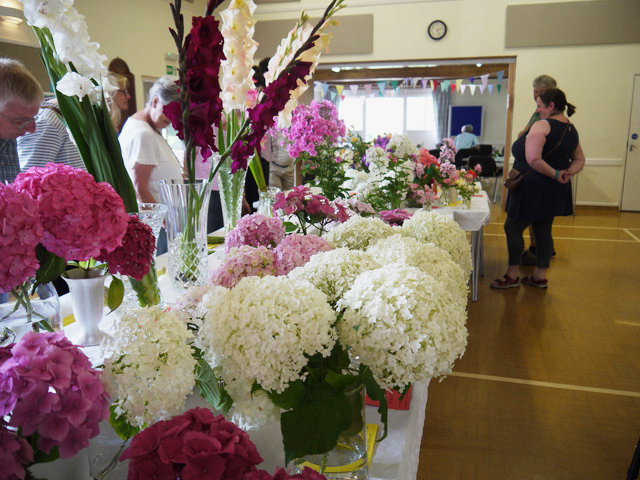 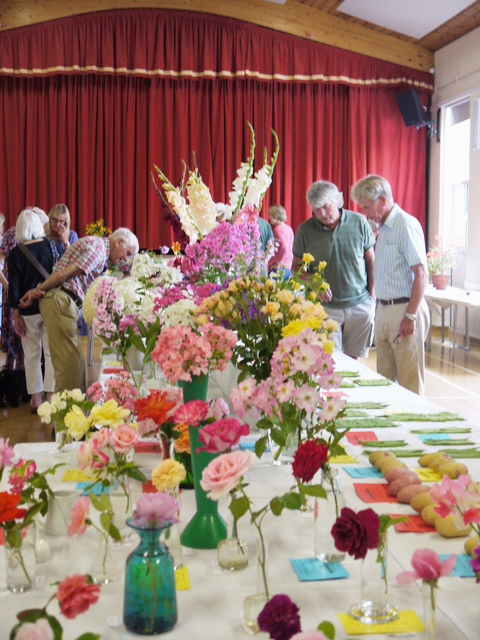